>State of the Farm – Part Two

>Continuing with a general update on various farm things: 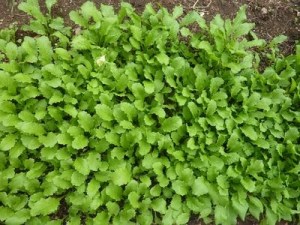 Turnip greens from planting number 3. I just chucked in seed because I was too lazy to get the seeder out for a mere 8′ length of bed. They might be a little dense 😉 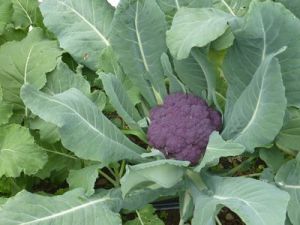 Purple broccoli. Beautiful until you steam it, then still nice but green. 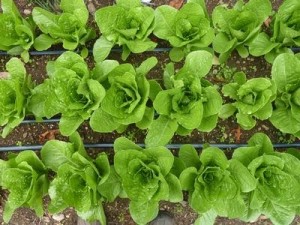 Romaines planted out from plant starts that got too big. I guess that’s a big advantage of having a veggie plant start operation; little waste. If we don’t sell it to a gardener, hopefully we can sell it to the health food store. 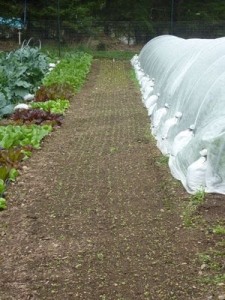 Our next bed of salad greens, planted about 3 weeks ago. Our original 60′ bed probably yielded close to $500 in cash and trade in two cuts. The first cut was more lucrative per hour since the weeds hadn’t taken control. Towards the end of the second cut, it was becoming quite labour-intensive to separate the weed from the food. We’ll know next year to have a closer succession of salad so that we aren’t caught without any to sell. Having said that, I’m not sure we could have sold all that much more.

Towards the left, our double bed of carrots under a low tunnel of reemay. The carrots range from 2″ to 6″. Last week we started selling them at the Tuesday market in bunches of ~10 for $2 and they sold out. We’ll probably double our supply for next week. There are only 3 Tuesday markets left this year so we’ll be fairly aggressive selling them. There’s been a lot of rain recently and much more in the forecast. I’ve now removed the reemay and will replace it with poly once we’ve extracted 20-30 more lbs of carrots for the next week or two. 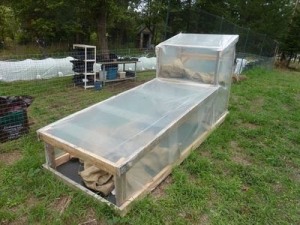 The solar dehydrator which I may dedicate a post to some day is coming in handy for drying some burlap sacks that I was having difficulty drying out in open air (rain). Come spring, it may come in handy for germination although a slight mod will be required. 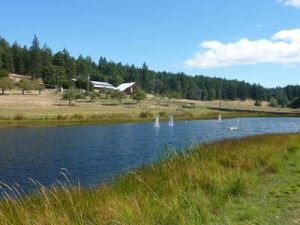 Just a pretty photo to end the update. While on a market research trip to Thimble Farm in the north end (which is spectacular), we stopped on Sunset Drive to watch a bunch of guys race RC sailboats in this large pond. Laura would love to have one of those. And we wouldn’t mind having the farm it’s on.

>State of the Farm – Part One 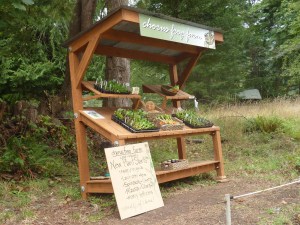 It’s time to catch this blog up on what’s been happening on and around Chorus Frog Farm. Our marketing department finally got her farm stand sign. Our “brand” is certainly getting around as most customers we speak to at the Tuesday Market, for example, know and recognize Hannah’s frog logo and its location on “Rainbow Road, across from the pool”. 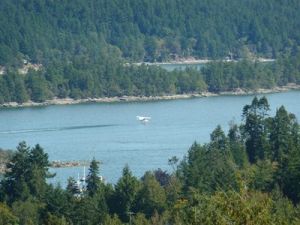 From time to time, we do stop to smell the roses, as we did recently. Behind the farm a couple of hundred feet up Mt Belcher is this primo Kodak Photo Op, just a 10 minute hike from weeding. 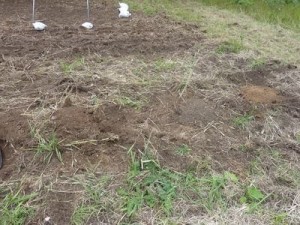 They’re a little hard to see but there are 3 small mounds of soil in the photo. Beneath them I used the rotary plow while the tractor was held stationary to dig 1 cubic foot holes into which I dump small buckets of kitchen compost from a social housing complex down the street. One of the residents approached us a while back to see whether we wanted their waste nutrients in exchange for them not having to pay tipping fees to get rid of it. We thought that was a great idea. We’re not putting it in the regular compost heap so as not to attract any more vermin. The idea of the holes is a variation on trench composting. Instead of worrying about smells, vermin and having to turn icky food scraps until they are broken down enough to spread on beds, you simply throw it in the soil and cover it. Next year or the year after, you plant something on or around it, to suck up those nutrients. At worst, we will have saved the carbon emmissions from having to ship some heavy kitchen waste to Vancouver Island. 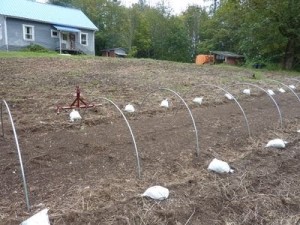 Last Saturday we did a bed blitz, turning a 6′ wide X 70′ long strip of the unused south plot into a double bed with cover. Because we are not putting up a fence around that plot, we have to deal with deer in different ways. One way is to plant things they won’t eat such as garlic which we will do next month. Another idea is to put up a low tunnel with a polyethylene cover. There are no gaurantees that the deer or rabbits won’t find their way in but it’s worth a try. We direct seeded about 1200 winter lettuces in about 5 minutes (I love the precision seeder). Of course, it took both of us several hours to get the bed to the point we’d be able to take only 5 minutes to plant. The other thing we will find out is when direct seeded lettuces sown mid-September will be big enough to harvest. I’ll say 3rd week of February. Any other guesses? 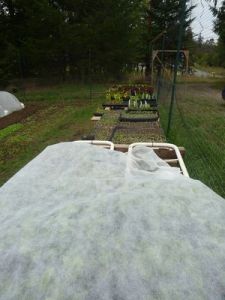 Pauline’s plant start business is still going pretty strong although it’s come time to warn people that starts planted now probably won’t produce much food until spring. Pauline figures that starts are well over half of our total sales. I’m looking forward to the spring plant start market. Now that people know where to find starts, we’ll be able to tap that market at a greater scale. Tomatoes, peppers, flowers, herbs. The list is only limited by our ability to find places to grow starts. Could be tricky without a real greenhouse. 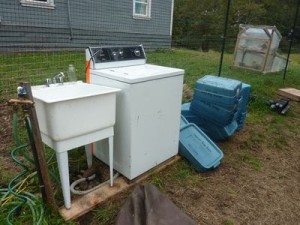 This beauty is what we use to spin our salad greens after harvest. That is, when we still had salad greens to harvest. We’ve also discovered that it trips the ground fault breaker when it’s been raining. And the effort I took to the open back and bottom hasn’t worked. We might be able to move it inside an out-building but I’m not sure even that will fix the problem. No matter; at least until something matures enough to harvest and spin. 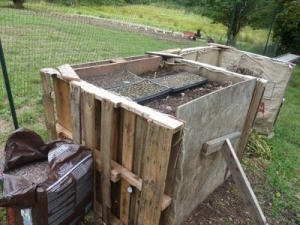 Another of Pauline’s ideas that I loved was the compost pile germinator which is nothing more than putting seed trays over top a flattened compost bin. When the ambient air temperature is in the single digits, we can count on the seed block soil temperature to still be in the teens. The core of the pile was in excess of 60 Celcius recently but, unless I turn it, the temperature will continue to decrease. At this point, we’re just about done starting new plants so, come mid-winter, we’ll probably get some additional material, mix everything up and use the anticipated heat increase to combat winter temps, perhaps in conjunction with a small poly roof to keep the rain out and the heat in. 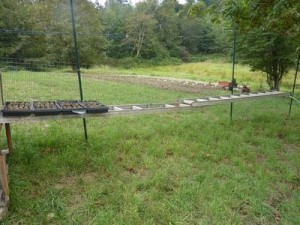 We are fortunate to pick up some real gems from time to time. This extension ladder was given to us by Pauline’s good friend Sydney, who is moving. Until we have a need to climb up a tall ladder, we’ll use it as more plant start space. 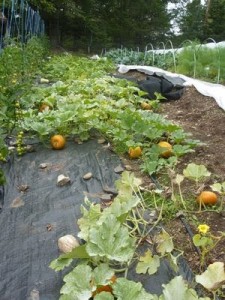 The winter squash are a mixed bag. These look ok and will probably throw off as many fruit as this family needs for its personal consumption. But with the amount of shade we get in the summer at the north end of these rows, sun lovers really suffer. I suspect the western beds on this plot that currently house the tomatoes, fingerlings and squash are much more suited to the salad greens. 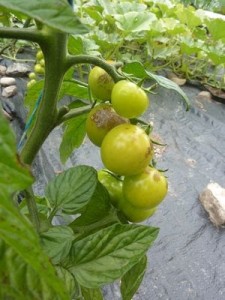 The tomatoes have finally been hit with what I suspect is late blight. Despite top pruning and mostly defoliating them a few weeks ago, the fruit just isn’t ripening very quickly with all the cloud, rain and low temperatures we’ve had in September. Next year I’m going to try using low tunnels to cover tomatoes grown on plastic mulch with no trellising. We’ll need double the amount of ground space for the same number of plants but hopefully the extra warmth will ultimately give us more fruit per square foot. The trick will be to not bake them in July and August. 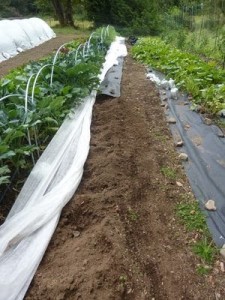 It’s not obvious but just to the right of the brassicas and the white fabric is a bed of potatoes. The first 25′ have been dug out with probably half of them unsellable due to insect damage (wireworm and others). They are yummy though once you’ve cut off the damaged parts. The remaining 50-60′ still have to come out. When the weather permits, I’ll attach the root digger plow to the back of the tractor and see whether I can uproot the rest in one pass. The shovel work seems excessive when you have the option of not doing it manually. Two problems: the potato hill is a little too close to the brassicas; there might be some collateral damage. Also, we’ll have to then put the potatoes into storage until we can sell or eat them, and yukons aren’t really a storage potato. On the other hand, if we leave them in the ground and the fall rains have come early, they may start to rot. Having gooey potatoes in the ground will be a terrible mess that really needs to be cleaned up if we hope not to create a long term problem of potato pests there. In the mean time, I’ve used some lumber wrap to create a narrow roof over the bed to hopefuly divert the bulk of the preciptation until I can extract them.

More in a few days.