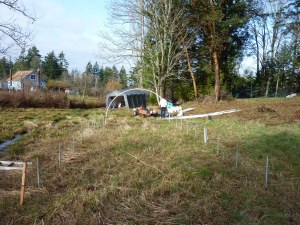 The high tunnel project officially got underway on the 22nd with (friend) Duncan not only lending me his truck but also his time. We started at Windsor Plywood and picked up about $600 of materials, including 1.25″ Sched 40 PVC, .75″ Sched 40 galvanized water pipe, and a stack of lumber.

We began by setting up a single guideline close and parallel to the seasonal creek. If, at that point, I knew how wide the tunnel was going to be, we could have run another parallel line at that distance. In this case, I wanted to use up some existing 24′ wide polyethylene. But the 24′ is what gets pulled over the structure, not the interior width. Furthermore, some of the poly width is consumed because it has to be wrapped around 1″X2″ battens along each sides’ edges Accounting for that fact, I figured on only being able to use 23′. Mathematically, one could then approximate the width using the equation Circumference = PI X Diameter and assuming that the high tunnel is essentially a half circle; an upside down half-pipe for all you boarders out there. So, doubling the 23′ to account for the full circle that the equation is based on and re-arranging it to solve for Diameter (width)we have:

In practise, I mumbled something about PIthagoras, both of us briefly tried and failed to find a pencil and we began cutting the water pipe into 4′ sections. I then post-pounded in all the posts on the marked side, leaving 2′ in the ground and 2′ above. Then we slipped one end of a 23′ coupled piece of PVC over one of the posts and bent it over in an arc to see what length it naturally gravitated to. Turns out, right around 14′.

The .75″ water pipe, BTW, went into the sopping wet soil really easily, so easily that I was concerned that they might also come out really easily. But when I tried to pull them out, I nearly pulled my back out first. Which probably means that I’ll need some sort of pipe jack to extricate them if/when we leave the property, particularly if the soil is dry at the time. In any case, I’m confident that they will not come out due to structural lift on a windy day.

With the width now known, we ran another guideline square and parallel to the first line (oddly, I didn’t mention Pythagoras even though I used his 3,4,5 rule for finding square) and pounded in the other sides’ posts before slipping each 23′ PVC rib on to each of its designated posts.

The area we marked out is as flat as unlandscaped ground gets around here, which means there’s a bit of variation in elevation from post to post. In addition, the posts I pounded in were 14′ apart plus or minus maybe 3″, plus their degree of plumbness varied by a few degrees. All this to say that, once all the PVC “ribs” were mounted on posts, we had to adjust some of them up a little so that, when viewed from the top of the structure, the tops were even.

One of the critical components in the building of this type of high tunnel is the top purlin which goes on top of the highest point of the ribs, running perpendicular to said ribs, from end to end. In this case, the top purlin is also 1.25″ PVC which we carriage-bolted to each of the ribs. Having the top purlin on top of the ribs prevents the polyethylene cover from sagging between ribs at the top where water is at most risk of ponding. Once a volume of water has accumulated at the top, the weight stretches the poly and allows even more water to accumulate which then threatens to collapse the entire structure. 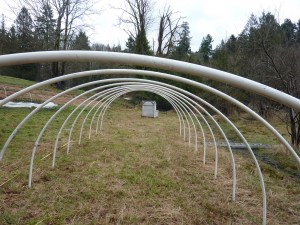 To finish off work day number one of this project, we ran a guideline on the inside of the ribs at about 5′ above ground and used it to screw 1″X2″ wood purlins on either side. While the purlins were 12′ long, they did not meet up nicely at the mid-point of the 3rd rib spaced at 4′. There was simply too much variation in the installation of the ribs for that to happen. As a result, we had to overlap the purlins, above or below each other to ensure all ribs were effectively tied to one another. This ended up looking quite bush-league and, as you will see in a later post, was re-done quite skookumly.

We’ve had a small flock of chickens since moving to Salt Spring. We started with two hybrid laying hens that we got as wonderful parting gifts when we left Haliburtion in 2009. We had raised those two – plus 26 of their ‘sisters’ – from day old chicks to 6 weeks old in our suburban Saanich basement. I would not recommend doing this unless you are aware of the many issues like smell, noise and canabalistic violence that can ensue. But it was an unforgettable experience in any case.

A few weeks after we moved to Salt Spring, Hannah and Laura got 5 bantam heritage birds from a Vancouver Island breeder. The whole lot of them spent their nights protected from raccoons and mink in a coop that the kids and I built out of scrap lumber and Windsor Plywood giveaways. They stayed safe from raptors in a 30X30 bird netting-covered pen. About a year ago, Pauline put a call out on the community list for a particular breed of rooster, for the purposes of mating the hens. Almost immediately someone nearby offered her rooster for a Valentine’s weekend of debauchery. Shortly after, one of the bantam hens got out of the pen and was killed by a hawk. Happily, ‘Ginger’ had left a clutch of 5 fertilized eggs prior to her death which her broody ex-coopmate warmed up over the next 3 weeks to produce 4 viable chicks. Of these four new home-growns, 2 were roosters. The roosters met their end somewhat unnaturally in July.

About the same time Ginger’s chicks hatched, we bought an unsexed Ameraucana chick which turned out to be female. We were also given 3 more silver sebrights, 2 of which were roosters. Last summer we sold a ‘mating’ pair of sebrights, leaving one mating pair for ourselves. Then, just prior to Christmas, we moved the whole flock from our backyard setup to a new home on the farm. Given all the extra space, both inside the coop and outside in the pen, we started adding to the flock by purchasing 3 barred rock pullets.

Since then we’ve been having a very distressing problem. Despite taking others’ advise to hang several strings of fishing line above the coop to keep out avian predators, it was only a couple weeks before we lost one of our prize heritage hens to a hawk. Because of this, I built 2 70’long X 6′ wide covered tunnels, thinking that this extra covered area would give them ample space to avoid or escape attack. But just after Christmas, another of our favorite hens and surrogate mother to Ginger’s eggs, was killed by a hawk. Most recently, our beautiful white bantam leghorn was killed although the hawk could not or did not fly away with its kill, implying that perhaps it has run out of birds in our flock small enough to remove.

To conserve the last of our bantam birds (a rooster and 2 hens), we moved them back home. Just before we had moved them to the farm, a dump of wet snow ripped and flattened the bird netting, rendering it unusable. So the girls replaced it with lots of ORANGE baling twine, copiously criss-crossed to and from each pen post . Orange apparently confuses hawks and other birds of prey but I’m not sure of anything these days. In any case, we missed the sound of Splash’s (the bantam sebright rooster) crow so it’s nice to have him back.

Oh yes, just before New Year’s we picked up another 3 full-sized pullets from a guy on the island who’s liquidating all his farm animals in preparation for a move. Two out of the 3 went to the farm but the runt of the litter is at home with us, where the other small birds are unlikely to abuse her.

A couple of days ago I got out the mega roll of baling twine and did the same overhead criss-cross at the farm pen that the girls did at home. It took about an hour and a half and was actually kind of fun because I tried (successfully) to do it without cutting the twine (I figure that if this protection technique is also unsuccessful, at least I can salvage my twine, sort of). With this new grid – which BTW, reminded me of a complex map of aviation airways-, the natural tree cover at one end and the larger average bird size, we’re hoping that predation will stop. If, after a month or so, we’ve not suffered any further losses, we’ll resume our flock expansion. The coop can probably handle 40 birds and we only have 9 at the moment. Demand for our eggs is significantly higher than our ability to supply them.

And, with that, I shall conclude this post with evidence of our third serious bout of winter this season, which occured a week ago and lasted two days. Oh, and a little known fact: last Wednesday (or possibly Tuesday), it snowed in all Canadian provinces. 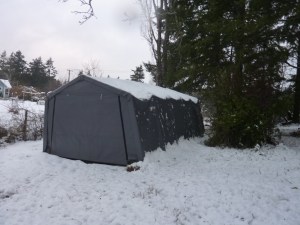